In any sort of trading, there are bullish and bearish tendencies. The former is used to describe when the price of an asset is moving up, and the latter for the opposite. When talking about a Crypto Bull Run, this refers to when a crypto is making a prolonged and usually rapid rise in price.

Crypto trading has borrowed a lot from traditional trading, including its terminology when it comes to bulls and bears. Bulls, in any sort of trading, are those traders that want the price of an asset to rise in order to make profits. This seems simple enough, but there are those who bet on a price to fall to make money, the bears.

When a trader decides to short an asset, they are betting that its price will go down, and by shorting, they will have the chance to make a profit if there is a substantial fall. But, traditionally, most traders will be bulls, and seek out bullish tendencies in an asset, including crypto.

When we speak of a crypto bull run, we are referring to an upward trend in the price of a specific crypto for an extended period — essentially just stating the price is on an upward trend. When it comes to crypto, these bull runs can be quite spectacular as the underlying assets are known to have high volatility and the chance to make massive gains in a short period of time.

There are also a number of reasons why something like Bitcoin can suddenly be on a bullish run. A bullish market for stocks can happen when the economy is in a state of growth or when technical innovation is presenting opportunities for investors. But, in crypto, there are other effects in motion, especially things like positive news and sentiment.

One of the more reliable Bitcoin bull run indicators over the years has been the Bitcoin halvings. A Bitcoin halving is an event where the mining rewards for Bitcoin are cut in half. The immediate impact of this is that the new supply of BTC coming into the market is cut by 50% almost instantly, every four years.

Due to supply and demand, there is a big spike in demand with lower supply, and this can lead to a crypto bull run — and has been shown to do so previously. 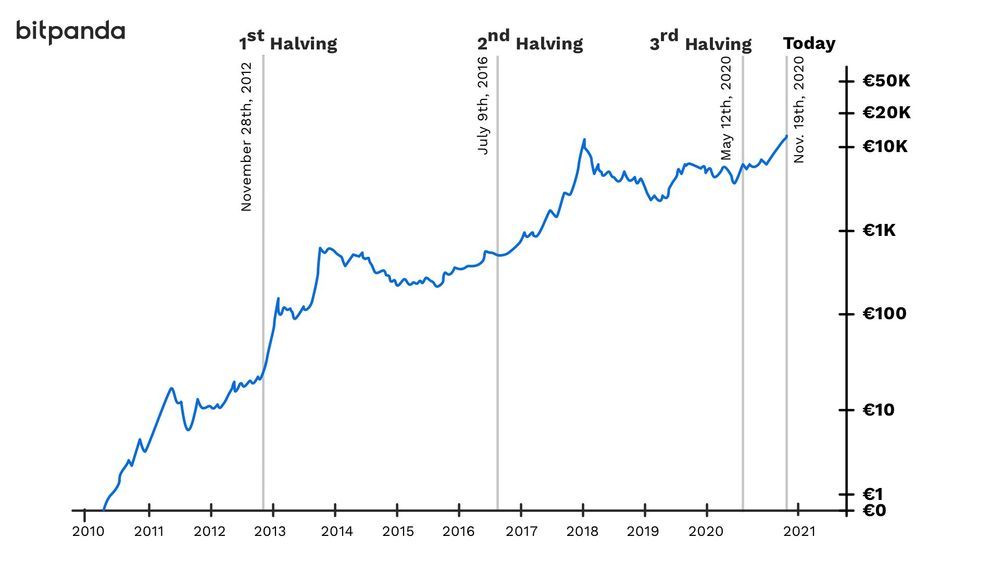 The first Bitcoin halving, which took place on the 29th of November in 2012, began a major bull run. A year after that date, there was an increase of more than 8069% getting the price of Bitcoin to around $1,000 from around $12 per coin.

In October 2015, the market started getting bullish seemingly in anticipation of the second halving which was due to take place on the 9th of July, 2016. Bitcoin had a smaller increase of 112% compared to the previous time, and the price of Bitcoin settled at about $650 per coin.

Part of the reason that Bitcoin is so attractive to investors has to do with its volatility and massive price gains. These of course can come with huge price falls, but an impressive, rapid, and strong crypto bull run has shown countless times how it attracts new people into crypto, and also enhances its reputation with current traders.